1. “Markets of One”
Mass personalization will march toward the mainstream

Normal allows its customers to take a few pictures of their ears and uses that to create personalized 3D printed headphones that fit perfectly in your ear. Normal CEO Nikki Kaufman describes it best as “Personalized, customized products built for you and your body.” In the last few years, we’ve seen companies that offer customers the ability to customize their products, by allowing customers to select from pre-defined options. Diego Tamburini, Manufacturing Industry Strategist at Autodesk predicts that customers will demand products that are uniquely tailored to their needs, tastes and bodies.

The design and construction of buildings, infrastructure and the cities they reside in are far too complex to rely on the wooden scale models of old. Architects, engineers and city planners are able to do things that were not possible in the past. As Phil Bernstein, V.P. Strategic Industry Relations at Autodesk put it, “Scale models, however beautifully made, are hardly up to the job of understanding how a building operates in the context of a city.”

Thanks to advances in laser scanning, sensors and cloud-based software, cities are now being digitized into 3D models that can be viewed from every angle, changed and analyzed at a moment’s notice.

Cities like Los Angeles, Chicago, Singapore, Tokyo and Boston are working to digitize not just the shapes and locations of the buildings but create a data-rich, living model of the city itself — complete with simulated pedestrian traffic, energy use, carbon footprint, water distribution, transportation, even the movement of infectious diseases. 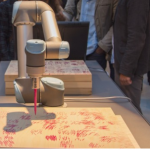 3. Human and Robot Symbiosis
Our relationship with robots will be redefined

In the future, humans and robots will collaborate and learn from each other. Today, robots are receiving data and use machine learning techniques to make sense of the world and provide actionable analytics for themselves and humans. Nevertheless, robots are not artists and they will need inspiration and guidance from us for the foreseeable future. In the words of Autodesk Technology Futurist Jordan Brandt, “A robot is no more a craftsman than an algorithm is a designer.”

When Lightning Motorcycles wanted to develop a next generation swing arm for their electric motorcycle, they adopted a new Autodesk approach for the project: A computer-aided (CAD) system called Project Dreamcatcher that automatically generates tens, hundreds, or even thousands of designs that all meet your specific design criteria.
Software like Autodesk’s Project Dreamcatcher is ushering a new era of design best described by Autodesk CTO Jeff Kowalski, “We’ll start to see more intensely complex forms, that could appear very organic, or very mathematic.” 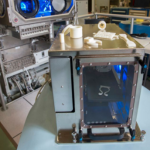 5. Manufacturing In Space
“2015 will be the year of space manufacturing.”

Made In Space is is focused on one thing: making and manufacturing in space. With over 30,000+ hours of 3D printing technology testing, Made In Space has led to the first 3D printers designed and built for use on the International Space Station. As Made in Space CTO Jason Dunn explains, “2015 will be the year of space manufacturing. No longer do engineers need to design around the burdens of launch — instead, in 2015 we will begin designing space systems that are actually built in the space environment. This opens an entirely new book on space system design, a book where complex 3D printed structures that could only exist in zero-gravity become possible.”

New virtual devices like the Oculus Rift and augmented reality applications will require an innovative generation of spatial designers. According to Autodesk Technology Futurist Jordan Brandt, current touch screen interaction will give way to ‘Immersion Design’ that leverages the spatial dimensions offered through emerging augmented and virtual reality platforms.

Live materials will be integrated into our buildings.

Today, buildings are dead, but new materials and technology are enabling living structures. For example, David Benjamin, founding principal of the design and research studio The Living, is collaborating with plant biologists at the University of Cambridge in England to grow new composite materials from bacteria, a process that uses renewable sugars as a raw material rather than non-renewable petroleum used for plastics. In 2014, The Living delivered Hy-Fi, a “living” installation for the Museum of Modern Art and MoMA PS1’s Young Architects Program competition. The temporary installation involved a 40-foot-tall tower with 10,000 bricks grown entirely from compostable materials — corn stalks and mushrooms — and developed in collaboration with innovative materials company Ecovative. That building was disassembled at the end of the summer and all of the bricks have been composted, returning to grade A soil.

8. 3D Data Explosion
The amount of 3D data will rapidly increase due to the proliferation of reality capture and new web technologies

“With the ability to create 3D models on mobile devices through apps like 123D Catch or the Structure sensor, virtually anyone can begin to capture the spatial world around them. Coupled with the broader adoption of WebGL technology and 3D printing, we can expect an explosion in the amount of 3D data available in 2015. Responding to user demand, social platforms will enable direct sharing of 3D data and start to provide immersive, collaborative experiences.” — Autodesk Technology Futurist, Jordan Brandt

Find out why we're the premier firm for engineering and technology career advancement. We offer business solutions and job opportunities you won't find anywhere else. Come and see why.

Are you a recent grad or a seasoned professional looking for a better fit? Need an upgrade to your career? Applied Engineering has opportunities for you.